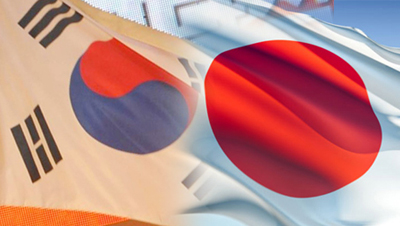 Diplomatic relations between South Korea and Japan have started after the Pacific War, 1965. Even though these two country are very close to each other geographically, their historic relations are intricate. The reason of this complexity first appeared in the division of Korea into North and South after the end of Japanese imperial hegemony in Korea. South Korea’s internal political situation was in a defying point at the end of the 1950’s to the beginning of the 1960’s. Demonstrations were held by people against Syngman Rhee’s autocratic regime. By the outstation of Syngman Rhee by the military coop, both Park Chung Hee and Eisaku Sato wanted the two countries to develop better relationships with each other. Therefore in 1965, an agreement on the issues between the two countries were achieved. There were five major topics of the negotiations: First, normalization of the relationship between the two countries. Foreign Minister Etsusaburo Shiina came to Seoul and expressed his apology as “It was truly regrettable that an unfortunate period existed within the long history of Japan-Korea relations and I express deep remorse”. Back then, ‘deep remorse’ phrase was the key expression of Japan’s apology.

The second issue was South Korea’s demand for reparations. Eventually Japan accepted to economically cooperate with Korea. The third issue was about the fisheries. Although policy measures taken by Korea such as the exclusive fishery zone were effective in the economic development between the two countries eventually, ‘Rhee SyngMan Line’ continued to exist. The fourth issue was the status of Koreans resident in Japan. When the war ended in 1945, there were about two million Koreans resident in Japan. Agreement made in order to give “…permanent right of residence to all Koreans who were living in Japan in August 1945 and to any children born in Japan up until ﬁve years after the 1965…” Lastly, fifth issue was on Takeshima, Dokdo island issue. Today, it is still a debate subject between the two countries.

During the first 30 years, economic relations flourished even though political relations were problematic. Trade, Japanese investment on Korea and tourism between the two countries have rapidly increased. By the assassination of Park Chung Hee, the political relations developed with ups and downs. For instance, prime minister Nakasone’s visit to Yasukuni in 1985 revived emotions in South Korea and China. Moreover, in 1986 another issue raised, the most vital issue of the period which affected Japan-Korea relations. South Korea reacted very harsh to the changed textbook of Japan.

For South Korea, 90s were the period of rapid economic development. In this period, its international relations chiefly determined by Gorbachev’s perestroika and the end of the Cold War. By this event, President Roh Tae Woo initiated diplomatic relations with Russia and China. In addition, relations with North Korea also started both with South Korea and Japan. In 1993, North Korea nuclear crisis made both South Korea and Japan nervous. Therefore, security relations between Japan and South Korea reinforced. Despite these developments, ‘comfort woman’ issue was the major focus in 90s in terms of Japan-South Korea relationship. Japan expressed their apology and deep remorse in this issue, but it met with criticism from different countries. However, according to Kazuhiko Togo, it was a genuine effort.

Japan’s blurry actions met by criticism such as the vagueness of its position after the World War II. Although many prime ministers used ‘remorse’ and ‘apology’ words in various ways, it did not have the desired impact in clearing Japan’s impression. Later, Murayama Statement appeared and Japan-South Korea relations developed more smoothly. New agreement about Fisheries and soccer has been made.

The year 1998 was the greatest year in terms of Japanese – Korean relations. First of all, joint Declaration ‘A new Japan Republic of Korea Partnership towards the Twenty-ﬁrst Century’ has been made. Presidents committed to develop relationships both in terms of culture and economy. Moreover, a mutually acceptable solution was introduced to handle the dispute of Takeshima. Furthermore, Japan-Korea Economic Agenda 21 was adopted. Trade has increased, policy of Japanese culture has liberalized and preparations for World Cup 2002 has been made. Therefore, the relationship between South Korea and Japan moved ahead despite of the Yasukuni Shrine and textbook issues. But North Korea was a threatening subject both for Korea and Japan. North Korea must felt isolated when South Korea initiated relations with Russia and China, thus struggled in front of the South’s development. In its environment full of scarcity, North Korea followed a new strategy called nuclear harassment.

Nevertheless, Korea and Japan’s economic relationship developed in various phases. Their economic relations were not even until the mid 80s when Korea finally started to gave its fruit of hard working to revive the economy. While Japanese economy slowed down during the 90s, Korean economy was growing exponentially after the 97-98 Asian financial crisis. Moreover, trading relationships declined between Korea and Japan, while Korea’s relations increased with the U.S. and China in terms of trade[1]. It can also be seen from the graphic below, suggested by Sang-young Rhyu and Seungjoo Lee,

The graph suggests that, since 1980s, China and the U.S. became Korea’s largest partners. Therefore it can also be interpreted as a representation of Japan’s diminishing economical relations with South Korea. The reason of this was a deliberate choose of South Korean government to lessen its ties with Japan in order to develop its economy as it aimed, independently from Japan. Further on this issue, Sang-young Rhyu and Seungjoo Lee states that,

“We argue that although this dramatic turnaround in Korea-Japan economic relations resulted from the rapidly shifting external environment surrounding Korea, it also reflects Seoul’s strategic choice to discontinue long-standing hierarchical economic ties with Tokyo in order to become a global player in high-technology industries.”[3]

Therefore, even though South Korea’s economy was highly determined by external and internal factors along with Japanese economic relations, the development of South Korea as a global power, started by changing its policies and moving forward from Japan focused economy. Moreover, Korean domestic political and economical elements played crucial role in terms of principal change in Korea-Japan monetary relations. The revolutionary decision in the Korean government’s monetary planning changed the choice of firms, which effectively encapsulated these new approach ideas as industry-level improvement techniques.

While the economical relations between Korea and Japan evolved as above during the history of financial connections between the two country, the decision of South Korea evolved  the country into a global power. Yet, if it can handle the asperities within its economical system it can achieve much more better with its perseverance along with the country’s young brains’ capability of research and development.